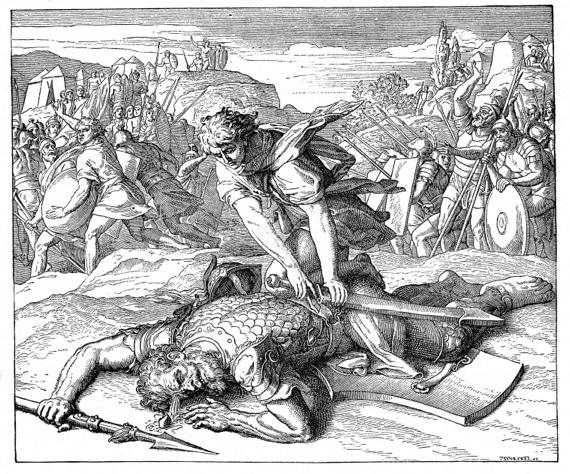 Many people fail at work and in life because they focus too much on the obstacle rather than the opportunity. I’m sure it’s often true in my own organization. Perhaps it is in yours.

When something goes wrong, we spend hours dissecting it. We often refer to these sessions as post mortems—which literally means “after death.” Shouldn’t that be a clue that we are on the wrong track?

I am not suggesting we should stick our heads in the sand. But I do think we should spend more of our time and other resources focused on what we want to create, where we have been successful, and how we can leverage our strengths.

The story of David and Goliath provides an excellent example of someone who focused on the opportunities rather than the obstacle.

Thousands of sermons have been preached about this story. Hundreds of books have been written. But as I was reading the story again this past weekend in 1 Samuel 17, I was struck by how useful it is in a business or leadership context.

Before David arrived on the battlefield, everyone was focused on the problem—Goliath. No wonder. This champion of the Philistines was nine feet, four inches tall (v. 4). It was difficult to ignore him.

Moreover, Goliath had a solid bronze helmet, a bronze coat of mail that weighed 125 pounds, and bronze shin guards. His size, coupled with his armor and a personal shield bearer, made him virtually invincible (vv. 5–6).

But in addition to being a one-man fortress, Goliath possessed a frightening offensive weapon. He had a bronze javelin that was “the size of a weaver’s beam” (think, mini-telephone pole) with a 15-pound iron spearhead (v. 7).

On top of that, he is hyper-confident and belligerent. He defied God, taunted the Israelites, and challenged them to a fight (vv. 8–11). The Israelites had endured his dramatic theater for forty days (v. 16).

In the midst of this, David arrives on the scene and sees Goliath for himself. Just as the Israelites begin (again) to run away, one of them mentioned to David that the king had offered a huge reward to anyone who could defeat Goliath. That caught David’s attention.

… it shall be that the man who kills him the king will enrich with great riches, will give him his daughter, and give his father’s house exemption from taxes in Israel” (v. 25).

To summarize, the king had offered three rewards to the man who could defeat Goliath:

David could hardly believe his ears. He asked another man standing nearby, “What shall be done for the man who kills this Philistine and takes away the reproach from Israel? For who is this uncircumcised Philistine, that he should defy the armies of the living God?” (v. 26).

Suddenly, the problem didn’t look so big. David began to shift his focus off Goliath and onto the opportunity.

Predictably, someone objects. (Someone always objects when you start tackling big problems they think are insurmountable.) Eliab, David’s oldest brother, was first in line (v. 28):

But David ignored his brother and asked another Israelite about the opportunity: “What shall be done for the man who kills this Philistine and takes away the reproach from Israel?” (v. 30).

Perhaps if it had been us, we would have spent more time focusing on the problem—analyzing Goliath, digging deeper into the problem, and trying to understand the various options before us. Not David.

Even King Saul, who had posted the reward—and didn’t have any other viable options—tried to talk David out of challenging the giant (v. 33). To add insult to injury, Goliath made fun of David, cursed him, and began running toward him (vv. 41–44). That must have been a frightening sight.

But David didn’t flinch. He declared His confidence the God who performs miracles (vv. 45–47). Rather than running away from the giant, the text says,

David hurried and ran toward the army to meet the Philistine. Then David put his hand in his bag and took out a stone; and he slung it and struck the Philistine in his forehead, so that the stone sank into his forehead, and he fell on his face to the earth.”

This made me reflect on my own approach to life. I wonder how much more successful I would be in tackling big problems if I would look past them and focus on the opportunities on the other side. How about you?

Question: Where is your focus, on the opportunity or on the obstacle? You can leave a comment by clicking here.