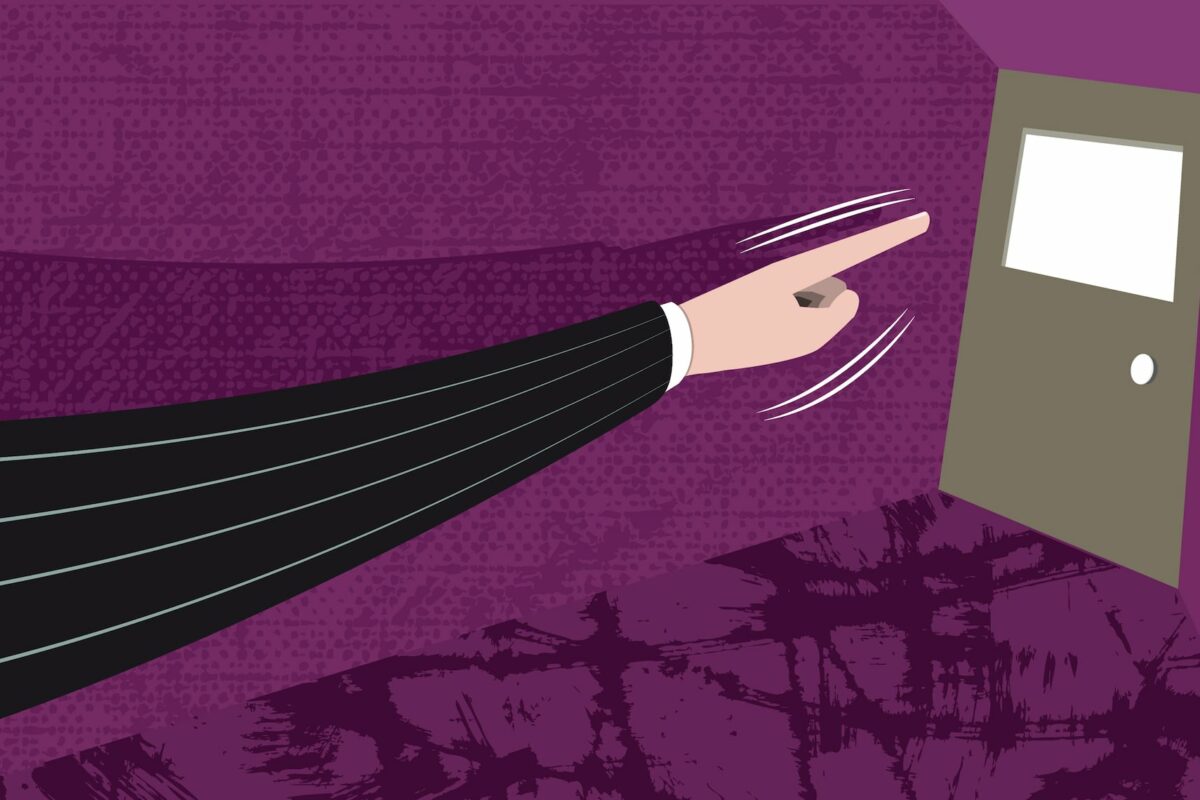 “Does it get easier the more people you fire?” someone once asked me. I’ve been in leadership for decades now, and there's no escaping letting people go from time to time. But that doesn't make it easier. “No,” I said, “it hasn’t. And I hope to God it never does.”

But while frequency doesn't translate to ease, it can translate into useful experience. I've learned there’s a right way and a wrong way to let people go when it's necessary. I've also learned that how we do it matters for the health of our organizations. Let’s start by looking at the wrong way to do it.

No letters or boxes

Early on in my career, I was with a company that decided to lay off five people who were in the field, selling in the midst of a recession. The sales manager should have flown out and met with each of them individually to deliver the bad news. At the very least he could have picked up the phone and called them.

Instead, he sent them the corporate equivalent of Dear John letters. They literally got a letter in their mailbox at home saying their job had been eliminated.

The damage from that sort of treatment is unbelievable—not only for the individual, but for the company. First, it affects the entire team's morale. Those left standing say to themselves, “So that’s what they think of us,” before sending their resumes to companies that might treat them better. Second, it poisons the applicant pool. Potential employees hear the story and look elsewhere.

When I became CEO of Thomas Nelson, we had an old-school firing policy. If you were let go, somebody from human resources escorted you to your office with a box. They waited while you packed and walked you out of the building when you were done.

To me, that was not acceptable. That sort of treatment might be necessary if you work for the CIA or some high-security facility. But at the vast majority of businesses, it’s needlessly humiliating. So I changed the policy. If we had to let people go, we would treat our departing colleagues well.

At the start, the change affected only individual departures. Then the Great Recession hit and really put my commitment to the test.

Every industry has their Great Recession story, but publishing took a major hit. At Nelson, sales fell 20 percent in twelve months. The book business doesn’t even have 20 percent margins. So we're talking about the survival of the business here. Layoffs were the only answer.

We had about 650 people on staff. Through three rounds of layoffs, we had to shed 28 percent of the staff, almost 200 people.

And we had let good people go, too. I think of one guy in my church, for example, who I had known for thirty years and who had been with the company for that long. We had to let him go. It wasn't about his performance—just the economy. But it didn’t make the conversation any easier.

I’ve been in leadership for decades now, and there's no escaping letting people go from time to time.Michael Hyatt

The only thing that made those hard conversation possible was a good process. I’ll walk you through the five steps we followed and how we used them. In this case, we’re talking about a layoff, but the steps apply to any difficult human resources conversation, including firing an underperforming teammate.

1. Start with the outcome you want

I remember that as we were just going into the recession, I got all of my executive team together. We had all collectively come to the conclusion that we needed to cut our staff. “Look, we love these people,” I said. “We want to treat them with dignity, with compassion, with respect. We certainly don’t want them leaving hating the company or, worse, being left to fend for themselves. What can we do?”

We wanted to give the maximum severance we could. We looked at the table in our employee handbook and doubled it because we were in a position to do that.

We decided that all of those laid off were going to get a phone call from one of the executives in the room. Even though they might have been three or four levels down from us, we were going to call personally and not offer anything other than just to say, “Hey, I want you to know I’m so sorry.” Just to acknowledge it.

We also said this together as a team. “Our mission is not done until these people are all placed in other organizations and have jobs.”

The target outcome was the right place to begin because that gave us our purpose. In everything, we asked, “What leads to that outcome?” The outcome will be different for every organization and every circumstance, but starting with the end in mind (whatever that end may be) is always the right move.

2. Discuss the plan with HR

We discussed the severance plans with people in the human resources department. We did this for many reasons including the fact that it is a legal and liability issue if you don’t have the right processes in place for layoffs. We wanted to make sure we were observing the law to its fullest extent, especially where our older employees were concerned, giving them every consideration.

And more important than legal concerns, we needed to have a plan for what happened once we delivered the news. Where did the conversation go from there? Should we send them to HR? How would we communicate the severance plan? And so on. With those answers in mind, we were able to proceed to our next step.

If you have one speck of humanity in you, firing people is hard. You don’t want to freeze up or have a meandering conversation with worried employees. It’s critical plan what you're going to say in advance and make notes on how you might answer questions.

The best way to do this is to have some sort of template so you don't miss anything and don't have to do all the thinking on the fly. That makes the next hard step much easier to take.

Once we had our outcome in place, consulted HR, and developed talking points, we quickly moved to the next step: calling people to meetings to deliver the bad news.

I encouraged my team to lead with the conclusion, tell them that the decision is final, give the reason, take questions, and let them vent if necessary. You lead with the conclusion because holding them in suspense is cruel and a waste of both of your time. You tell them the decision is final so that they understand that trying to convince you otherwise is a waste of time. You give the reason because people either want to or deserve to know.

In this case, I think it was good for the employees to hear that it wasn’t their fault, that they didn’t do anything to bring this on themselves. It was simply what that the company had to do to survive. And the next step made this all a little more bearable.

As part of our first step, we developed a post-termination communications plan to keep in contact with and help our former employees.

Somebody on the team had contact with the people who were let go on a regular basis, and in every case, we asked, “What can we do to help? Can we write letters of recommendation? Can we make phone calls on their behalf?” We did so, regularly, and helped to get many, many people new jobs.

Some people may say that we didn’t have an obligation to do that. Legally, they are correct. But doing right by people matters to a company’s reputation, which can make it easier to attract new talent when the economy recovers. It can also help you sleep a little better at night.

As I said, different situations call for different actions. But whatever the circumstance, following this five-step plan enables you to let people go while treating them with the utmost dignity. Start with your desired outcome, develop a plan with HR, create talking points in advance, initiate the tough talk, and then follow up as necessary.