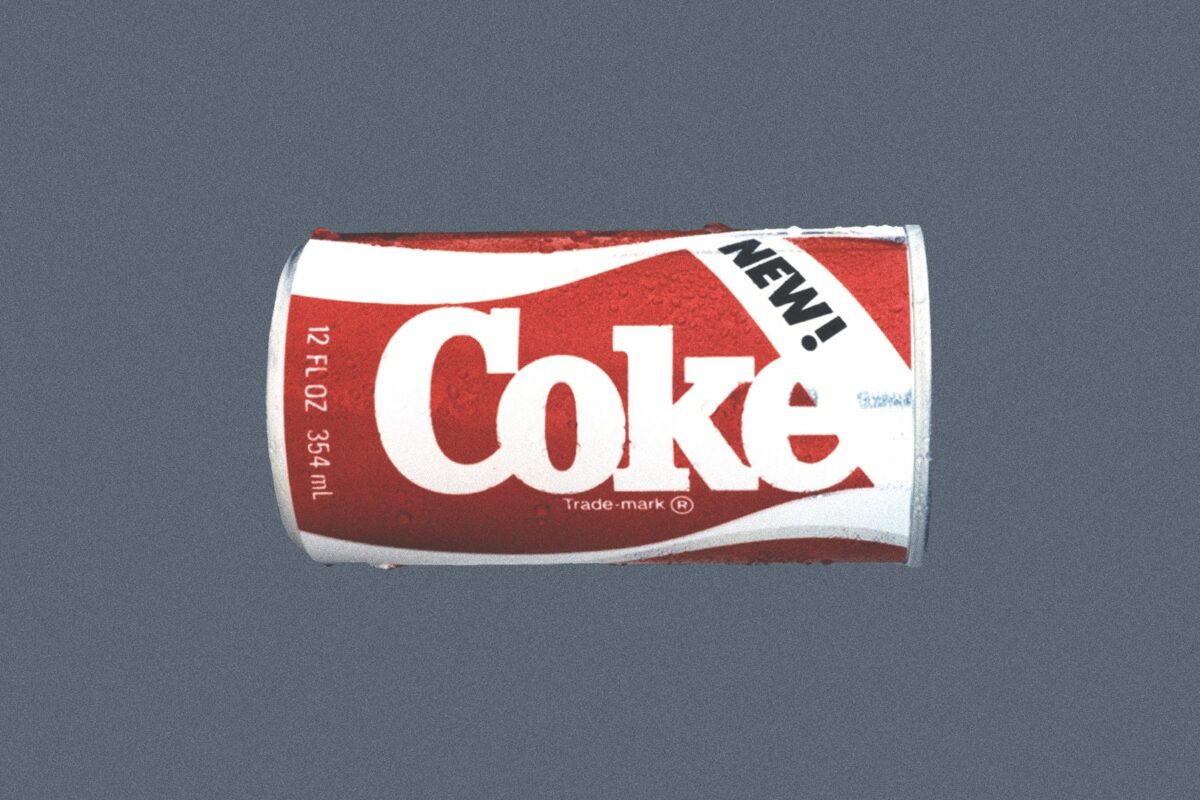 The Coca-Cola Company’s own website admits that it was probably “a day that will live in marketing infamy.”

On April 23, 1985, Coke Chairman and CEO Roberto Goizueta announced to 200 reporters that the company would be changing its formula. It would be still be called Coca-Cola, but this “New Coke” would taste better and people would love it.

Goizueta explained why the decision to change Coke’s 99-year-old formula was by no means a hasty one. The company had commissioned nearly 200,000 taste tests of the new recipe. The tasters mostly loved it. “To market research experts, to our bottlers, and to the retail trade, these numbers represent a staggering superiority,” he beamed.

Science itself, it seemed, had blessed New Coke. Full speed ahead and damn the fizzy bottles.

And yet, American customers didn’t love this New Coke as expected. In fact, quite the opposite thing happened.

There was mass hoarding of the Old Coke that was going away, popular protest songs, petitions, tens of thousands of angry letters to Coca-Cola along with thousands of angry phone calls every single day. People staged their own quick-and-dirty versions of a modern Boston Tea Party, with soda pop patriots pouring out bottles of New Coke in the streets.

“You have to be ever vigilant in our democracy,” one particularly worked up protestor told Newsweek. “When they took old Coke off the market, they violated my freedom of choice. It’s as basic as the Magna Carta and the Declaration of Independence. We went to war with Japan over that freedom.”

Sales of New Coke started to go soft and in pockets of the country completely cratered. Even managers within the company who had been enthusiastic about the newer, sweeter Coke started to urge the leadership to bring back the Coke that people knew and loved.

After several internal meetings, Goizueta and company decided in July that they needed to bring old Coke back as Coca-Cola Classic. News of this got out fast. “Peter Jennings of ABC News interrupted the daytime soap opera General Hospital to report that old Coke was returning,” writes Thomas Oliver in the great book The Real Coke, The Real Story.

Shortly after, in a press conference with a mood “entirely different from the press conference just three months before,” writes Oliver, Coca-Cola execs kept things short and contrite. To those who supported New Coke, Goizueta offered thanks. For those who didn’t, he promised, “our message to this group is simple: We have heard you.”

5 lessons from the New Coke fiasco

With that concession, and with Coca-Cola Classic back on shelves, Coke came roaring back, more popular than ever. At first New Coke was sold alongside Classic. Over time, given a choice, consumers clearly preferred Coke the way that it had been. New Coke’s name was changed to Coke 2 and is no longer sold in the United States.

The Coca-Cola Company argues that the New Coke fiasco “stands today as testimony to the power of taking intelligent risks, even when they don’t quite work as intended.” Which is a funny way of putting it when you turn the replacement of your core product into a mass, persistent protest movement.

Here are 5 takeaways that might help leaders today as you try to balance introducing new products with promoting old favorites:

1. Don’t let the competition distract you

It’s good to know your competition, but it’s not good to let them live rent free in your head.

One reason the Coca-Cola Company thought they had to mess with Coke's formula was the Pepsi Challenge. It was a highly publicized, blind taste test that Pepsi created to show people preferred their product over Coke.

This bothered Coke executives to distraction and they tried to come up with a way to do better in taste tests. And thus New Coke was born. Critics said that it tasted more like Pepsi, and they were right.

It’s good to know your competition, but it’s not good to let them live rent free in your head.Jeremy Lott

When the Coca-Cola Company launched New Coke, they fervently believed that consumers would prefer it based on previous, copious research. But that didn’t happen. Why?

“The simple fact is that all the time and money and skill poured into consumer research on the new Coca-Cola could not measure or reveal the deep and abiding emotional attachment to original Coca-Cola felt by so many people,” Coca-Cola President Donald Keough said at the time.

A later explanation has been kinder to all the researchers, but only on the surface. People’s individual desire for sweetness – known as their “sweet tooth” – varies greatly, but a large number of us can stand only so much sweet. So while Pepsi and New Coke tasted better to people at first swig, that didn’t really capture the whole experience. You see, as people kept drinking, they liked Coke Classic better precisely because it didn’t taste too sweet.

However, just because we can explain it well after the fact doesn’t let the “market research experts” that Coke’s CEO praised off the hook. They introduced misplaced certainty into what should have been a very tough decision. Coke had a huge customer base that had been happy with the product for many decades. Experts said don’t worry about it, they’ll love it, because they missed something very important.

When they were announcing the reintroduction of Coke Classic, Coke execs admitted that while the sampling data had favored New Coke, there was a substantial minority that didn’t like it, even on first taste.

If they were running for office, that might not have been a problem. The job there is to get to 50 percent plus 1. Business doesn’t work that way. Every customer matters and substantial minorities of those customers are better thought of as “revenue streams.”

If New Coke had been offered right alongside Coke Classic, it’s hard to imagine so many people getting worked up over it. Sure, they might have been annoyed at the ads, but they wouldn’t have been deprived of a product that they cared about deeply. Too many SKUs can be a logistical problem, yet if they’re wildly profitable maybe suck it up.

“The saying ‘If it ain’t broke, don’t fix it’ is a motto for losers” said Coke bottling exec Marvin Griffin in the middle of the New Coke crisis.

That insult betrays something about how Coke’s c-suite was thinking about this issue. Bolstered by marketing data, they were saying, “We know better than the customers what they want.” That attitude, as much as anything else, is what led to all the outcry.

The most obvious lesson the New Coke story highlights is not the “power of taking intelligent risks” but rather the value of learning from your mistakes, as soon as possible.

The Coca-Cola Company was able to put this behind them and move on to better things because they listened to their customers and gave them what they actually wanted, as opposed to what Coke had thought they wanted. When they did, their flagship beverage sailed on to greater acclaim than ever before.